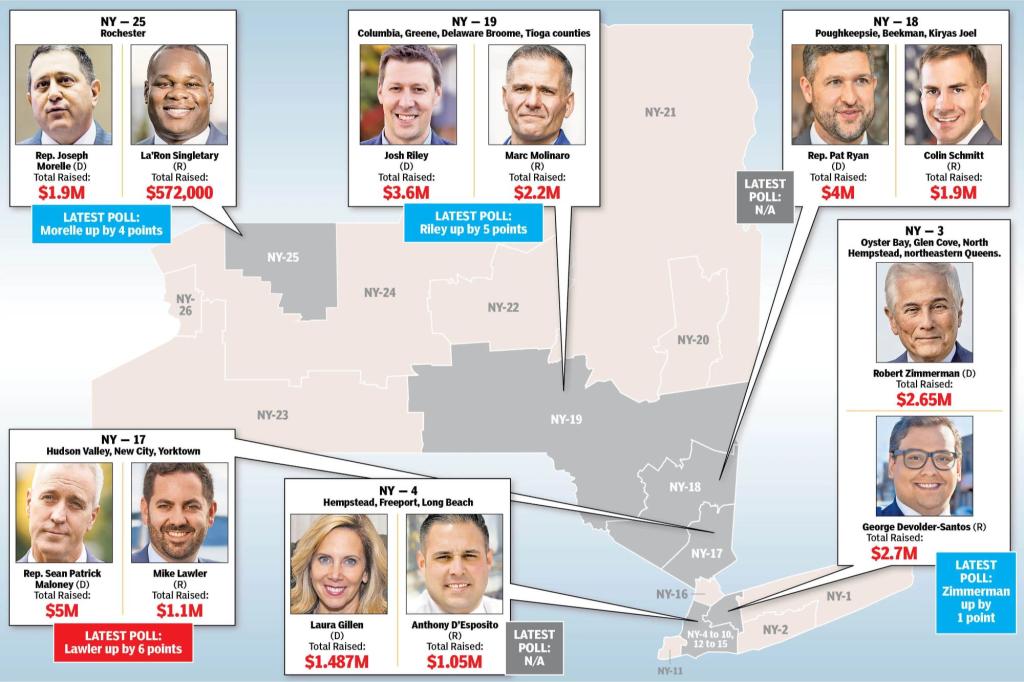 Top Republicans looking to New York to flip the House

New York — of all places — is in play as a swing state on Election Day.

Top Republicans in the House of Representatives say the road to their majority will run through the Empire State, after redistricting left the historically blue stronghold with toss-up seats they aim to turn red.

“We believe New York is a top battleground state. We have a chance to win a bunch of seats in New York and we have invested nearly $10 million in making that happen,” said Rep. Tom Emmer (R-Minnesota), chairman of the National Republican Congressional Committee.

Republicans need to flip just five seats to take control of the House and snatch the speaker’s gavel from California Rep. Nancy Pelosi.

The chairman has been barnstorming the country on behalf of his candidates: “I’m like a rock coming back to the Earth, bouncing through the atmosphere, every day we are in a different place.”

He is hopeful about the Empire State.

“You have a special situation in New York,” Emmer said. “Democrats control every level of government in New York and frankly the voters are fed up with the results we’ve seen. That’s the other reason I’m very confident we’re going to have a good night in New York.”

The red wave isn’t likely to reach into New York City’s five boroughs, but the party is targeting a slew of districts in Long Island and upstate New York.

“Mike Lawler, I believe is going to beat Sean Patrick Maloney,” Emmer said. “[Maloney] has pushed radical pro-criminal polices like cashless bail that allows violent criminals to literally terrorize innocent citizens at 9 o’clock at night and be back on the street committing more crimes by 9 am the next morning.”

“Long Island could be a sweep,” Emmer added, boasting that not only did he expect to hold GOP Reps. Lee Zeldin’s and Andrew Garbarino’s seats, but that he believed the party would flip the other two seats in Democratic hands, now open thanks to the retirements of Reps. Tom Suozzi and Kathleen Rice.

Emmer repeatedly dismissed Democratic fundraising, which has bested GOP money hauls in virtually every hot race in New York this cycle. Maloney himself has raised almost five times the cash as Lawler.

“The issues they’re running on are not the issues that people care about. They have been burning money in the streets.” Emmer sniffed. “We never have their money. I would argue it costs more to sell a lie than to sell the truth.”

The GOP is also playing defense in New York in a few races, putting in cash to save Rep. Nicole Malliotakis on Staten Island and to hold onto an open GOP seat upstate which includes Democratic strongholds like Utica and Binghamton.

Though Emmer was confident the majority was in the bag, he refused to speculate on how many seats the party might pick up in New York, which he visited last month.

“The energy is there,” Emmer said.

Latest Poll: Riley up by 5 points

This district stretches from Ithaca to the border of Massachusetts. Dutchess County Executive Marc Molinaro is taking his second stab at the seat after losing a special election to Rep. Pat Ryan in August in a race that was widely considered a bellwether. With redistricting, Ryan hopped to the neighboring 18th district, while Molinaro will face Riley, a local attorney from Endicott. The new 19th district leans Democrat, and supported Joe Biden over President Trump by a 52-48 percent margin. But amid spiraling crime and inflation since Molinaro’s first loss, Emmer said Molinaro was “going to win.”

Ryan, a former Ulster County executive and Iraq War veteran, barely had time to measure the curtains after his upset special election in August before having to once again fend off a Republican challenger. He will go head-to-head against New Windsor Assemblyman Colin Schmitt. Both men have deep ties to the district and the race is one of the the state’s most competitive. Schmitt has leaned into GOP talking points around “reckless spending” and Historic inflation. Ryan has made abortion rights a central issue.

Latest Poll: Lawler up by 6 points

Maloney is the only member of the House Democratic leadership facing a competitive race this cycle and knocking him out has become a top GOP priority. The party has dumped millions into the race to boost Assemblyman Mike Lawler. Maloney, a talented fundraiser and dogged campaigner, alienated many allies when he muscled his way into the 17th district after redistricting. The region’s incumbent Democrat, freshman “Squad” member Mondaire Jones, ultimately jumped ship for a tough Manhattan primary that he lost to Levi Strauss & Co. heir Dan Goldman. Maloney subsequently beat back a challenge from woke State Sen. Alessandra Biaggi. During his time in office, Maloney made a name for himself hiring violent ex-cons into top party positions, giving his personal trainer a job on his House staff, and supporting cashless bail. “I think he’s gone. The tenor of the discussion has changed entirely. He is on the wrong side of the crime argument,” said Democratic strategist Hank Sheinkopf.

Latest Poll: Zimmerman up by 1 point

Voters in northwestern Long Island find themselves in a bruising general election fight between Zimmerman, an affable public relations executive, and financier Devolder-Santos. Both are openly gay, marking a first for a major-party congressional race in the US. Suozzi handily put away Santos in 2020, but with his retirement, Republicans are increasingly hoping that a red wave could bring the aspiring pol over the finish line. Zimmerman has sniped at Santos over his apparent opposition to abortion rights and Biden’s bipartisan infrastructure bill, while Santos says his opponent had an agenda that “does not speak to the issues we have today.” Sheinkopf said. “Zimmerman was all abortion until a week ago, suddenly he became crime. That tells me he’s in trouble.”

Voters in southwestern Long Island will be losing Democratic Rep. Kathleen Rice, offering another open seat for Republicans to snatch. The race pits Gillen, a former Hempstead town supervisor, against D’Esposito, a retired NYPD detective. The district has been controlled by Democrats for two decades, but Long Island Republicans are hoping for large turnout from the faithful and that enthusiasm for native son Zeldin could drive expanded turnout. D’Esposito has been named in at least three lawsuits during his time with the NYPD which cost the city more than $80,000 in settlement payouts.

Latest Poll: Morelle up by 4 points

Few expected the Rochester-dominated district to be competitive at the beginning of the cycle. Incumbent Morelle has repped the district since 2018 — taking over for Louise Slaughter, who kept the seat safely Democrat for more than three decades. Morelle is facing a spirited challenge from Singletary, a former Rochester police chief. The political newcomer has leaned heavily into his law and order credentials and has spoken of the need to beef up police and end cashless bail. “Morelle was never on anyone’s map, but what we have seen recently is that this seat’s in play.” Emmer said.