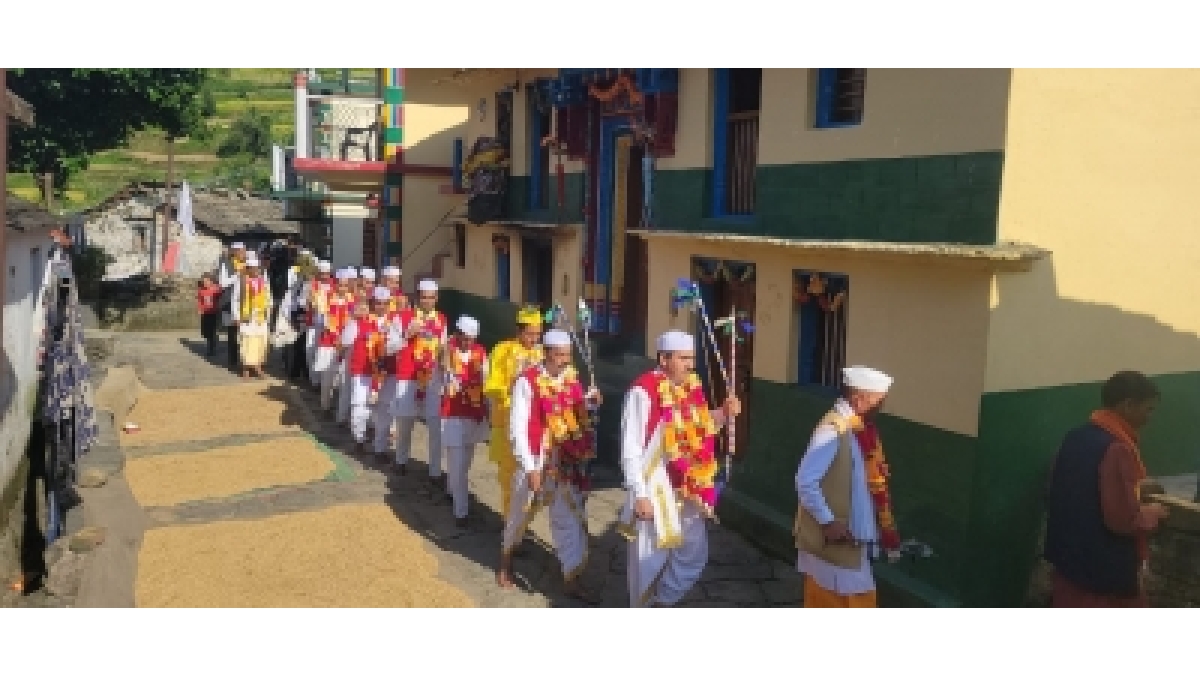 Based on devotional spirit, the culture here holds a special place mythologically and historically as it is believed that all the sons of Manu who recognise the difference between dharma and adharma vow to keep the culture alive.

The culture here has a sense of harmony, devotion and faith in God. The conflict between dharma and adharma, as depicted in the Mahabharata, is also a special part of the culture here. This is known as Pandav Nritya or Pandav Leela.

Pandav Leela is the part of Uttarakhand’s culture that reflects its age-old history. The culture has been keeping this history alive for centuries.

The Pandava dance is the traditional folk dance of Devbhoomi Uttarakhand. Legend has it that Pandavas came here in search of Shiva at the time of their ascension to heaven.

It is also believed that after the war of Mahabharata, Pandavas handed over their weapons to the people of Uttarakhand before leaving for Heaven. In many villages here, their weapons are worshipped.

The events of Chakravyuh and Kamal Vyuh of Mahabharata, composed in Garhwali language by Acharya Krishnanand Nautiyal, are performed.

This exciting event is organised in the nearby villages of Kedarnath-Badrinath Dhams of Rudraprayag-Chamoli districts.

The history of Pandavas in Garhwal is also found in the Kedarkhand section of Skanda Purana. Pandav Leela is a prominent part of the culture here, and keeping up this mythological and religious culture, the villagers organise this event in a grand manner.

This war between Pandavas and Kauravas take us to the Dwapara Yuga.

On the first day, Pandavas carry Lord Krishna with them and wield their weapons. Besides, the deities here take orders from Bhumialo and Panch Pradhans for the preparations for the war. The story of Mahabharat is played out till its conclusion on the tenth day.

On the second day, the body of Paaya Pati (a deity tree) of Lord Shri Krishna is shown.

On the third day, the forest-dwelling Pandavas in Dharamshila and mighty Bheem in the honey bee episode are depicted.

On the fourth day, the mighty Kigach is killed by the Pandavas.

On the fifth day, the Pandavas get the news of death of Bheem. They call all brahmins and sages to Bheem’s funeral, in which Bheem takes the form of a sage and joins the Pandavas in this task. Mother Kunti feeds the saints and recognises Bheem from his style of eating. The true form of Bheem is thus revealed.

On the sixth day, a rhinoceros is slaughtered by Arjuna. This rhinoceros belonged to Arjuna’s son Nagarjuna. When Nagarjuna came to know about this, he unknowingly shot his own father with his arrows. But with the blessings of the gods and goddesses, Arjuna was saved from death.

On the seventh day, Pandavas perform the funeral of their father Pandu at the Ganges. This period is also known as Shradh Paksha in the entire Hindu religion, when Pind Daan is offered to ancestors.

On the eighth day, the historical war of Mahabharat begins between the Kauravas and the Pandavas in the vast merciless lands of Kurukshetra. The great warriors of the Kaurava army are killed by the Pandavas, who emerge victorious in this war.

On the ninth day, there is joy in killing the ungodly Kauravas by the Pandavas; and the same Pandavas incur the sin of killing humans and gurus. All the Pandavas go to Shri Bhagwan Kedar Dham to wash away their sins for killing them. Together they give up their weapons forever and devote themselves to ther worship of Lord Kedar Nath.

On the tenth day, after the victory, by the order of Lord Shri Krishna, they left for Shri Badrinath Dham, from where they would ascend to heaven, and the Pandavas would attain salvation in different places.

This day is also known as Santi (concluding) of Pandava Leela. Huge religious sacrifices are performed on this day. Food and donations are given to Brahmins. Besides, the Prasad of the Pandavas is also distributed to everyone.

The distinction between dharma and adharma helps us identify truth from falsehood and distinguish the path of sin from virtue. Thus, by means of this cultural practice of Uttarakhand, a significant part of out culture remains alive and thriving.