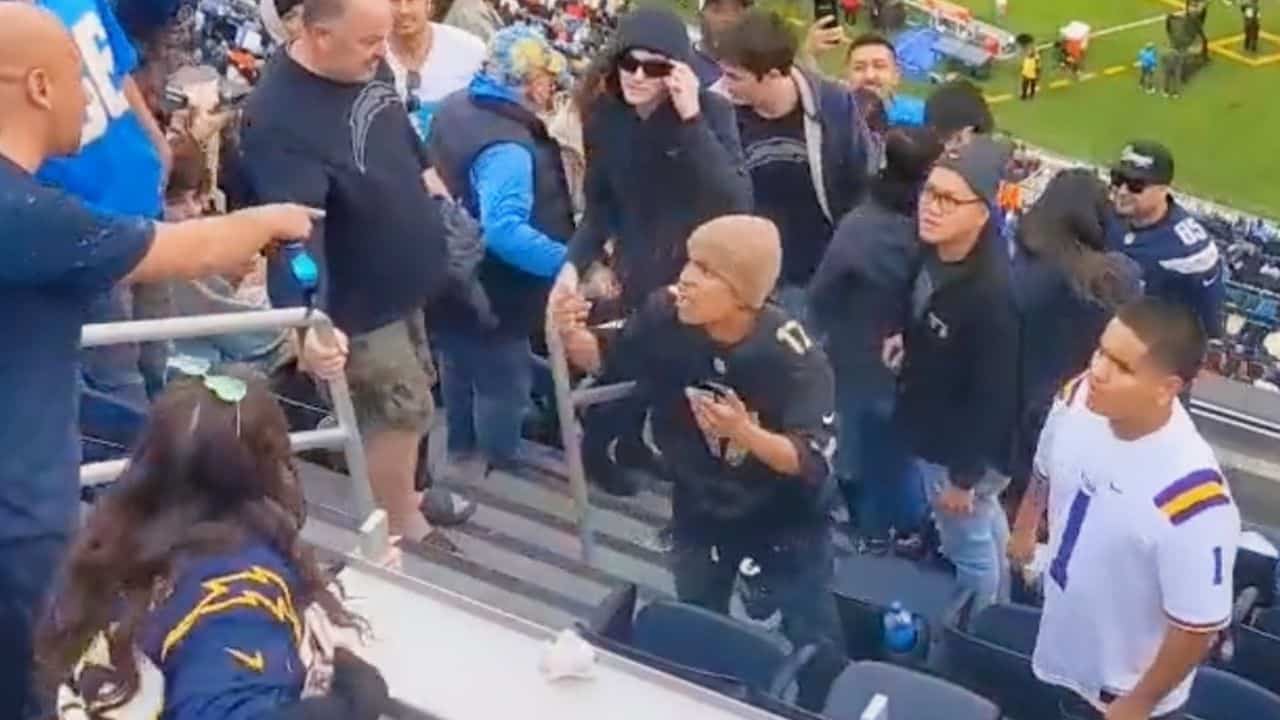 Nowadays, the Los Angeles Chargers fan base isn’t widely regarded as the NFL’s most passionate but an insane fight video has now gone viral

Just don’t say it to these supporters who chose to start fighting each other after Sunday’s game because they were so enraged.

It’s a sign that something major happened when fans of the same team start fighting, which is what we’ll suppose happened in this instance.

Chargers Fans Beat Each Other During Game vs Titans, Fight Video Goes Viral

There was fighting among the Chargers fans.

These Chargers supporters were fighting among themselves in the stands as their team, the Los Angles Chargers, was defeating the Tennessee Titans on the field. Before security arrives, a few drinks and meals were flying in both directions. You would presumably assume that at that time it was over, but not quite.

Attacks are launched by the opposing group as one group is being led from their seats and onto the concourse. And before you know it, chaos has erupted. However, it’s good to see Chargers supporters getting fired up over something.

Watch the viral brawl video below.

You want to see a bunch of idiots??? Chargers fans fighting each other 🤣 But seriously…come on #TENvsLAC pic.twitter.com/o3w2RulN34

The Tennessee Titans lost to the Los Angeles Chargers 17-14 on Sunday at SoFi Stadium, dropping to 7-7, on a four-game losing streak, and with just a one-game lead in the AFC South. Wide receivers for the Titans totalled six catches for 32 yards. The only other Titans players with 30+ receiving yards were tight ends Chig Okonkwo and Austin Hooper. Derrick Henry led the Titans with 59 receiving yards on four catches.

In total, Ryan Tannehill went 15-22 for 165 yards and a pick six. On 21 carries, Derrick Henry gained 104 yards while rushing. With a total of nine tackles, Greg Mabin led the Titans.

The Chargers are now assuredly in the running for an AFC postseason spot with an 8-6 record after defeating the Titans, 17-14. It’s highly likely that this squad will play in the postseason for the first time since the 2018 campaign with games against the Colts, Rams, and Broncos all remaining on their schedule. That ought to increase the energy at SoFi Stadium during the upcoming month. Perhaps a few more fights as well.