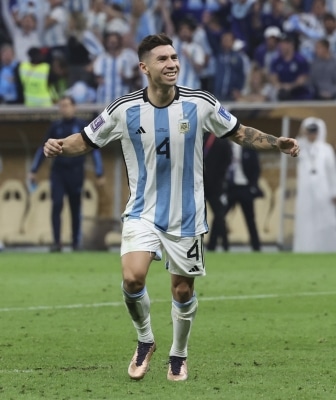 Doha, Dec 20 The 2022 World Cup final will go down in history as one of the greatest ever, as Argentina won 4-2 in a penalty shootout after the scoreline was locked at 3-3 at the end of extra time. And, Gonzalo Montiel will forever be remembered as the player who scored the winning spot kick, with the Sevilla FC right-back displaying cool confidence to send France captain Hugo Lloris the wrong way and to kickstart the celebrations.

Not only was it a historic penalty, but it was also a brilliantly executed one. The full-back didn’t even look at Lloris and, with the world watching, he focused solely on the ball, dispatching a solid and sure kick to his left.

That made it ten penalties converted from ten penalties attempted in the 25-year-old’s career, after he started taking spot kicks while working under Marcelo Gallardo at River Plate. “We were nervous and I couldn’t watch, but he has ice in his veins,” Montiel’s mother said after the victory.

Montiel was able to celebrate becoming world champion alongside his Sevilla FC club teammates Marcos Acuna and Papu Gomez, who also made significant contributions during the tournament. In total, there were 10 LaLiga Santander players in the triumphant Albiceleste squad, more than from any other league, as Lionel Scaloni had also called up Atletico de Madrid’s Nahuel Molina, Rodrigo De Paul and Angel Correa, Real Betis’ German Pezzella and Guido Rodríguez and Villarreal CF’s Geronimo Rulli and Juan Foyth, in addition to the Sevilla FC trio.

Of those 10 players, only Rulli didn’t feature at all during the tournament in Qatar, given that he was the backup goalkeeper and Emi Martinez’s performances between the sticks made him undroppable. Every other Argentine LaLiga Santander player featured at some point and several of these Spain-based stars were key to the team’s run to the final and victory in it.

For example, Atletico de Madrid midfielder Rodrigo De Paul was the beating heart of the midfield, always covering the spaces close to Lionel Messi to give the Albiceleste captain freedom to roam. In the final, De Paul won six fouls for his side, the most of any player in the match, and also made five recoveries. His Atleti teammate Nahuel Molina was excellent too and started ahead of Montiel at right-back in this game, rewarded for his solid performances all tournament, which included a goal against the Netherlands.

Silver and bronze medals for other LaLiga Santander stars

There were also several LaLiga Santander players in the France team that competed so hard and so well until the very end. The quartet of Jules Kounde, Antoine Griezmann, Aurelien Tchouameni and Ousmane Dembele all started the final, while Eduardo Camavinga was a substitute and one of the catalysts for France’s second-half comeback after coming on in the unfamiliar position of left-back. They all took a silver medal which they can be proud of, having played so well over the past month.

Meanwhile, Croatia finished in third place after defeating Morocco 2-1 in the third-place playoff on Saturday. That was yet another achievement in the incredible career of Luka Modric, with the Croatia captain celebrating that success alongside fellow LaLiga Santander players Ivo Grbic and Ante Budimir. The midfielder even went home with the World Cup Bronze Ball, given to the third-best player of the entire tournament, which he can place next to the World Cup Golden Ball he earned in the 2018 tournament in Russia.

All in all, there were 19 LaLiga players who ended this World Cup with a medal, which is more than a fifth of the 83 who were called up by their national teams for the tournament. These players who finished on the World Cup podium represented seven different Spanish clubs, namely: Atletico de Madrid, FC Barcelona, CA Osasuna, Real Betis, Real Madrid, Sevilla FC and Villarreal CF. They’ll be welcomed back by those clubs to the sound of applause as they now prepare for the resumption of LaLiga Santander.