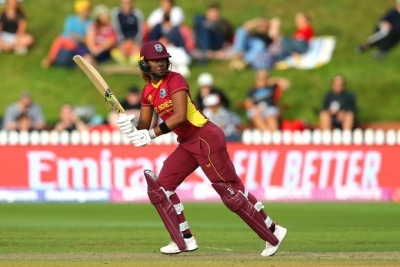 Matthews, who has picked up five wickets in the ongoing T20I series against England in the Caribbean, jumped up three places in the bowling rankings and one spot in the all-rounder rankings to reach the top five in both lists.

Matthews is now four rating points away from the top-ranked Sophie Devine in the MRF Tyres ICC Women’s T20I Player Rankings for all-rounders. She also jumped up to No.4 in the bowling rankings behind Sophie Ecclestone, Sarah Glenn and Deepti Sharma, the ICC said in statement on Tuesday.

There was also a significant gain in the rankings for England’s T20I opener Sophia Dunkley, who moved up 19 places to close in on a spot in the top 10.

With 147 runs in the four T20Is in West Indies so far, Dunkley is the leading run-getter by a fair distance and has moved up to No.12 in the batting rankings, making her the highest-ranked England batter ahead of Danni Wyatt and Nat Sciver.

Meanwhile, New Zealand quick Lea Tahuhu also jumped into the top 10 of the bowling rankings after Jess Jonassen and Megan Schutt dropped points in the T20Is against India.

The New Zealand veteran had only jumped into the top 20 recently after topping the wickets chart during the recent series against Bangladesh.

Australia star Ashleigh Gardner rose up nine places in the bowling rankings to make an entry into the top 20. She also leapfrogged New Zealand’s Amelia Kerr to be placed fourth in the all-rounder rankings.

Veteran Ellyse Perry, who has been in good form with the bat in the India T20Is, also moved into the top 10 of the all-rounder rankings by jumping three spots.

She also made a significant leap in the batting rankings, improving 17 places to occupy the 34th spot after back-to-back fifties in the India series.