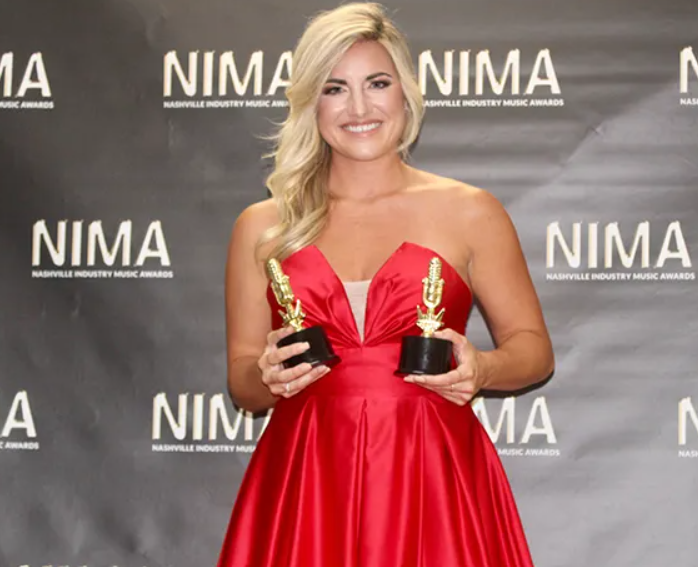 Who Is Morgan Myles on The Voice? Meet The Vocalist Who Got A 4-Chair Turn

Morgan Myles, who was on Season 22 of The Voice, seems to be on the verge of becoming a big name in the country music business.

Myles has a natural talent for writing songs, and the themes she writes about are strength, determination, and self-reliance.

She moved to Nashville in 2009 to get a degree in the music business at Belmont University. Since then, her career has grown in a big way. This was possible because of her strong voice, catchy melodies, and great lyrics.

With her huge 5-octave vocal range, the emotional singer-songwriter shows that music has always been her passion, even when things have been hard.

Who is The Voice’s Morgan Myles? How old is she?

Morgan, who is 35 years old and from Pennsylvania, has been on the road for the last 16 years. He has even opened for Blake at a few festivals.

The rest, as they say, is history, but Myles started playing music in the Quaker State when she was three years old. In 2009, she moved to Nashville to get a musical education and work as a musician.

According to her website’s biography, as a child she loved Eva Cassidy and Carole King’s songs and listened to Janis Joplin, Bonnie Raitt, and Susan Tedeschi.

Since she was young, Myles has loved being in the music business. She did an internship with a company that made commercial jingles while she was still in high school.

A little more than ten years ago, Myles went to Nashville’s well-known Belmont University to study at the Mike Curb College of Entertainment and Music Business. But before that, she spent a year at the Berklee School of Music in the Boston area.

All We Know About Morgan Myles’s Parents

Mogan was born to Karen and Dan Pinsoneault. They used to live in Williamsport, Pennsylvania, but moved to Nashville a few years ago to help her pursue her career. Morgan played sports and danced as a child, but she eventually focused on getting better at singing.

She has been trying to become a recording artist since she graduated in 2009. Even Miss Molly knows how to talk about her. Morgan worked as a nanny for two kids while she was in college. The kids called her “Miss Morgan” out of respect and love.

Even though their mother died, Morgan’s relationship with the rest of the family has stayed strong. In 2016, Rolling Stone named her one of the “10 New Country Artists You Need to Know.” That same year, she released her first EP, “Miss Morgan Myles,” which has six songs.

Even though there are a lot of other Myles songs you can stream online, it looks like that EP is no longer one of them. This has “Acapella,” her best-known song to date, which has been played more than 500,000 times on Spotify. It is about getting rid of the bad things in your life, especially in your relationships.

She has worked with people like Richie Brown and Rebecca Lynn Howard. She won the award for best female artist from the CCMA in 2009.

Who is Morgan Myles’s husband? Is she married?

It looks like Morgan Myles isn’t with anyone. She also likes to keep her personal life quiet, so not much is known about the men she has dated in the past.

She talks to her fans and people who follow her on Instagram. At the time this was written, she had more than 46,600 followers.

She also has a dog named Teddy, who she often shows off in her Instagram posts. In one of the posts, she shared a video of the dog with a caption;

“What a funny tale… When we saved Teddie as a puppy, they had given him the name “Bimbo,” which we thought was strange. Then, a few weeks later, we found out that they said he was like “Bimbo” from the Bakery Company. He’s definitely a TED, though.”

“Therapy,” a great nine-song CD by Morgan, came out in 2020. The songs “Sanctuary” and “Therapy,” which are sad ballads, and “Overserved,” which is a happy kiss-off song, stand out.

Since then, she has put out the singles “Contagious” and “Woman of My Word,” both of which came out last year. She thinks that the last one, which is her newest, is one of her most honest songs.

With whom does Morgan Myles go out?

Our records show that Morgan Myles is single right now.

On July 18, 1986, the country singer was born in Pennsylvania. The hit EPs Miss Morgan Myles, No. 22, and Review put her on the map as a singer, songwriter, and guitarist. Richie Brown and Rebecca Lynn Howard are among the people she has worked with. She was named the best female artist by the CCMA in 2009.

Morgan Myles is not with anyone as of 2022. Morgan’s age is 36. CelebsCouples says that Morgan Myles has been in at least one relationship before. She has never been engaged before.

About the man who is dating Morgan Myles

All dating histories are checked by our users to make sure they are true. We use data and resources that are available to the public to make sure that our dating statistics and biographies are correct.

Who did Morgan Myles go out with?

Morgan Myles tries to keep her personal life and love life private, like most famous people. Check back often, because we will keep adding new dating news and rumors to this page.

Morgan Myles’s boyfriends: She has been with at least one man before. Morgan Myles has never been married before. We are currently looking into the dates and hookups that have happened in the past.

Online rumors about Morgan Myless’s past relationships can be different. It’s easy to find out who Morgan Myles is dating, but it’s harder to keep track of all her hookups, dates, and breakups. Even harder is keeping every dating page and relationship timeline for a celebrity up to date. Please let us know if you find any information about Morgan Myles that is out of date.

How is Morgan Myles’s love life?

Morgan Myles isn’t with anyone.

How many times did Morgan Myles get together with someone?

Morgan Myles has been with at least one person before.

What is Morgan Myles’s family size?

She doesn’t have any kids.

Is Morgan Myles going out with anyone?

There is no way to get this information.

The story of Morgan Myles

During her first year at the well-known Berklee College of Music, she worked part-time as a nanny to pay the bills.

On the next page, you can find out how popular Morgan Myles is getting, how much money he has, and more.

Morgan Myles is said to be one of the singers who will be on Season 22 of The Voice.

In an interview with CMT in 2018, she said that she was interested in music from a very young age. “When I was three years old, I would just sit down at the piano and start singing and playing. I think I’ve always felt that way… Music is my therapy, what I love, and what makes me happy. It has never changed.

She says on her website that she grew up listening to Janis Joplin, Bonnie Raitt, and Susan Tedeschi, and that she admired Eva Cassidy and Carole King’s songwriting.

She also went to a Whitney Houston concert for her 11th birthday. Morgan says, “Women with big voices influenced me because I wanted to be like them.” I tried to sound like any diva you can think of.”

She went to Berklee for a year to study music, and then she went to Belmont University in Nashville.

Rolling Stone named her one of “10 New Country Artists You Need to Know” in 2016 after she put out a six-song EP called “Miss Morgan Myles.”

It looks like you can’t stream that EP anymore, but you can stream a lot of other music by Morgan Myles. This includes her 2018 single “Acapella,” which has been played more than 500,000 times on Spotify and is her most popular song to date. It’s about getting rid of all the bad things in your life, especially in your relationships.

More recently, in 2020, Morgan put out a great nine-song album called “Therapy.” Some of the best songs are the soulful ballads “Sanctuary” and “Therapy” and the fun “Overserved” kiss-off song. Check out the music video for “Sanctuary,” which is beautiful.

Since then, she’s put out two more singles: “Contagious” and “Woman of My Word.” Both of these songs came out last year. The last one is her most recent release. She says it’s one of the most honest songs she’s ever written. “It helped me get through a hard time, and I hope it will help others who are going through something similar.” I hope this song will help anyone in a toxic, isolating situation stand up for themselves and move on to a better situation.”

Morgan has opened for a number of nationally known artists, including Morgan Wallen and Texas Hill, a trio made up of American Idol alum Casey James, Season 7 winner Craig Wayne Boyd, and Season 10 runner-up Adam Wakefield.