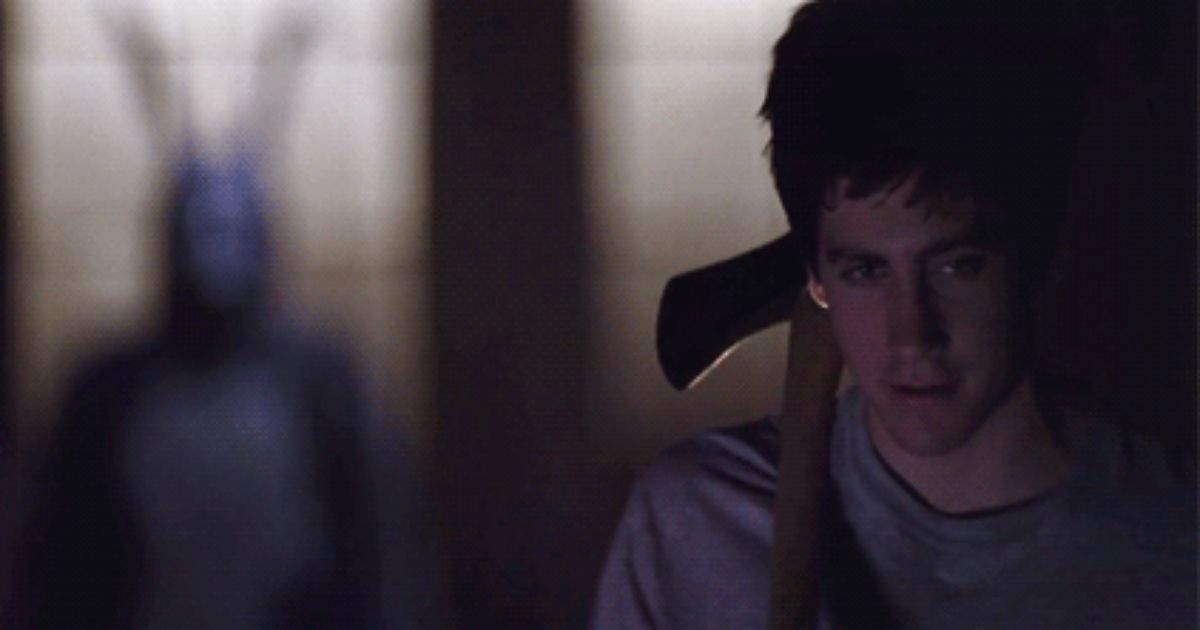 The movie world is filled with winding plot lines and unexplainable endings, but none of these may be as psychologically intriguing as Donnie Darko. Inviting viewers in for a tumultuous journey back in time, the film takes place over 28 days in Middlesex, Virginia (actually filmed in L.A.) during the ’80s, criss-crossing time and space to get there. The movie was even filmed within the same amount of time, creating a sense of organic action between characters without too much room for unnecessary artificiality. The end result is one of the greatest cult classic films in recent history, and perhaps one of the best of all time.

Following the doomed life of the titular character following his lucky disappearance after a plane crashes over his family home, the story details his mental downfall as he is plagued by the appearances of a furry costumed rabbit by the name of Frank. He breaks the news to Donnie that the end of the world is coming in 28 days, encouraging him to get into serious trouble while chaos devolves further around them. The film’s release in 2001 was shadowed by the tragic events of September 11, leading to less advertisement and less initial popularity at the box office. Despite this, the film has found a devoted fan base throughout the decades since its release. This is why Donnie Darko remains a cult classic.

Donnie Darko seems to fit somewhere between a story about what looks like a teen’s experience with schizophrenia and a dangerous parable about mortality and finality. While its true meaning is still debated by audiences around the world, this aspect of the film solidifies that it requires a rewatch almost immediately after the first time you see it. Viewers often flock to the Internet after the credits roll in search of an explanation, which aids in creating conversation surrounding this story. The mind-boggling plot in itself makes the film a cult classic.

There’s much more to Donnie Darko than what was initially explained in the film. According to an article from the Radio Times, the director’s cut offers more insight into its confusing events, expanding further on its time travel element. It’s generally accepted in circles of film critique and analysis that Donnie is singled out as the Living Receiver. The Radio Times’ article puts this more into perspective through an exact timeline of the film’s events. From a Tangent Universe alongside the Primary one, Donnie is tasked with crossing over with an Artifact (the engine of the plane that fell into his bedroom). This will close the gap between the two worlds and set things back to normal. But after deaths start to occur, it becomes Donnie’s duty to lay down his life to ensure this will happen.

Besides the film’s incredible soundtrack featuring original and reinterpreted Tears for Fears songs, Donnie Darko is filled with quotable instances of dialogue from its cast of characters. This is true whether they make full usage of the movie’s R rating with jointed curse words or if they’re more family-friendly phrases that are equally memorable. Others are more down-putting, like Roberta Sparrow’s melancholy motto, “Every living creature on this earth dies alone.” Thanks to the age of the Internet, we’ve even gotten the chance to see a couple of these quotes become memes, like the “I made a friend today.” “Real or imaginary?” exchange between Donnie and his therapist, Dr. Lillian Thurman.

There are so many incredible lines that deserve to make this list: “Why do you wear that stupid bunny suit?” “Why are you wearing that stupid man suit?” But the most iconic Donnie Darko quote may just be uttered when Kitty Farmer shows up at the Darkos’ front door to talk Rose Darko into chaperoning the appearance of Samantha’s dance group in Los Angeles. As Rose blinks at her, Kitty’s desperation builds until she finally shrieks, “I made her lead dancer! Sometimes, I doubt your commitment to Sparkle Motion!” In this instance, the character of Kitty really encapsulates the picture of a devoted PTA parent at the end of her rope.

Related: Jake Gyllenhaal Looks Back at 20 Years of Donnie Darko, the Movie That Changed His Life

Besides Donnie Darko‘s eponymous character played by a young Jake Gyllenhaal, the rest of the film’s cast serves as an introduction to soon-to-be-stars who really took off on their own incredible careers. Of course, Maggie Gyllenhaal serves as Donnie’s cool older sister Elizabeth. Jena Malone brings a snarky yet earnest characterization to the role of Gretchen, the new girl in the neighborhood who Donnie takes an immediate interest in. Seth Rogen’s very first appearance onscreen is his brief portrayal of student Ricky Danforth, offering a crass initial line.

The older members of the cast are afforded an equal opportunity to shine. Patrick Swayze delivers a cheerily creepy performance of sleazy Jim Cunningham, the motivational speaker who shows up at Middlesex High School to try and turn around the lives of the teens there. Drew Barrymore portrays Karen Pomeroy, an English teacher whose teaching methods are called into question after the vandalism and flooding of the school. Katharine Ross brings a serious yet soft feeling to her role as Dr. Thurman, guiding Donnie through his confusing thoughts and worsening mental state.